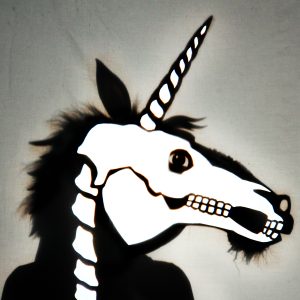 CURIOUS CONTAGIOUS ~ 55 mins. General Audience
(the show is mostly wordless with some written text, and can be performed in English or French).

A dark comedy about viruses in the body of a unicorn. Beautiful and strange, with handmade layered projections and original music.

Mind of a Snail’s Curious Contagious is a darkly comedic modern fairy tale genetically spliced with a surreal science film. A stressed-out Unicorn falls ill while building a giant donut shop. Meanwhile, a pair of quirky viruses search for the perfect place to replicate. As the viruses cause increasingly serious symptoms, the unicorn is forced to make a difficult choice.

5/5 “breathtaking, both in beauty and execution” -Theatre in London

“a visually beautiful, funny work which is emotionally and politically complex” -London Yodeller