If you have any questions, please don’t hesitate to contact us. 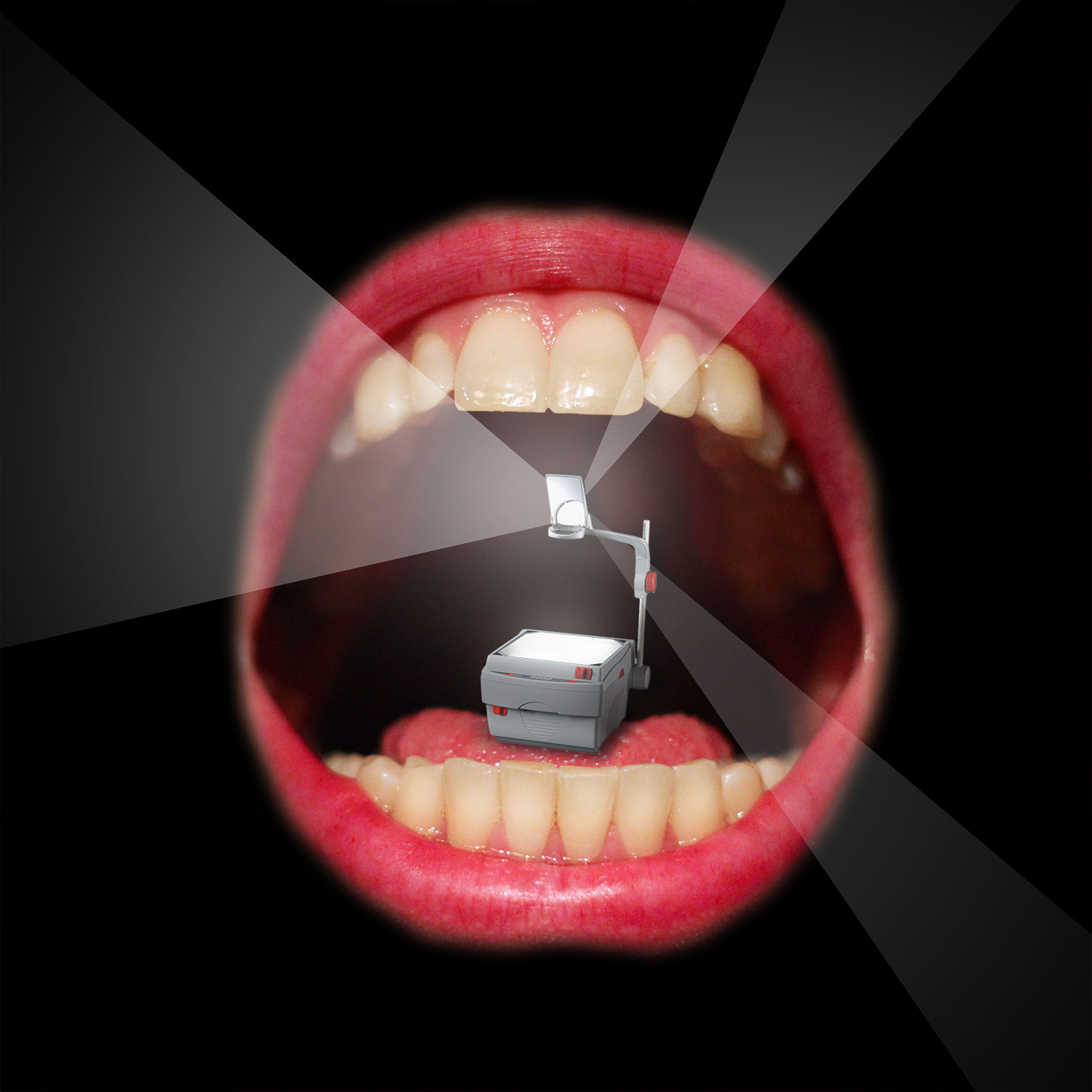 MULTIPLE ORGANISM is a genre and gender­-bending surrealist comedy for adults (18+). Expect bizarre and hilarious nudity using the body as a projection surface, plus colourful shadow puppetry projections, and an original musical soundtrack.

“unlike anything you’ve ever seen… the show’s freewheeling inventiveness, technical precision, visual and acoustic texture, and giddy transgressiveness make it a must see for anyone who appreciates artistic risk ­ and wildly original success” 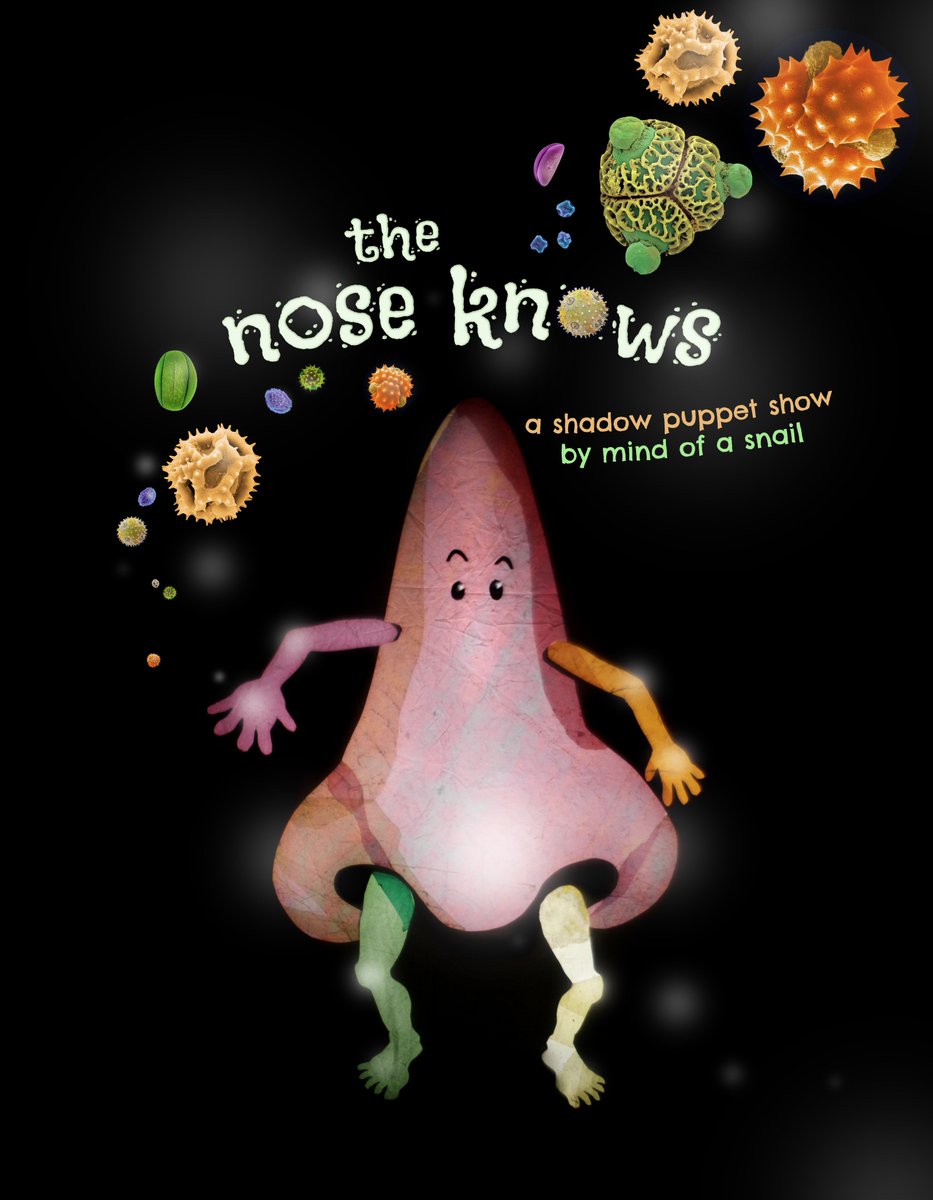 Journey with Mind of a Snail to unseen microscopic worlds inside the body. “The Nose Knows,” is a hilarious, imaginative, and musical shadow puppet show for all ages! Watch as Professor Onomatopoeia and Clovis use their “zoom machine” (overhead projectors) to look into how the nose works and to find out why it’s running! 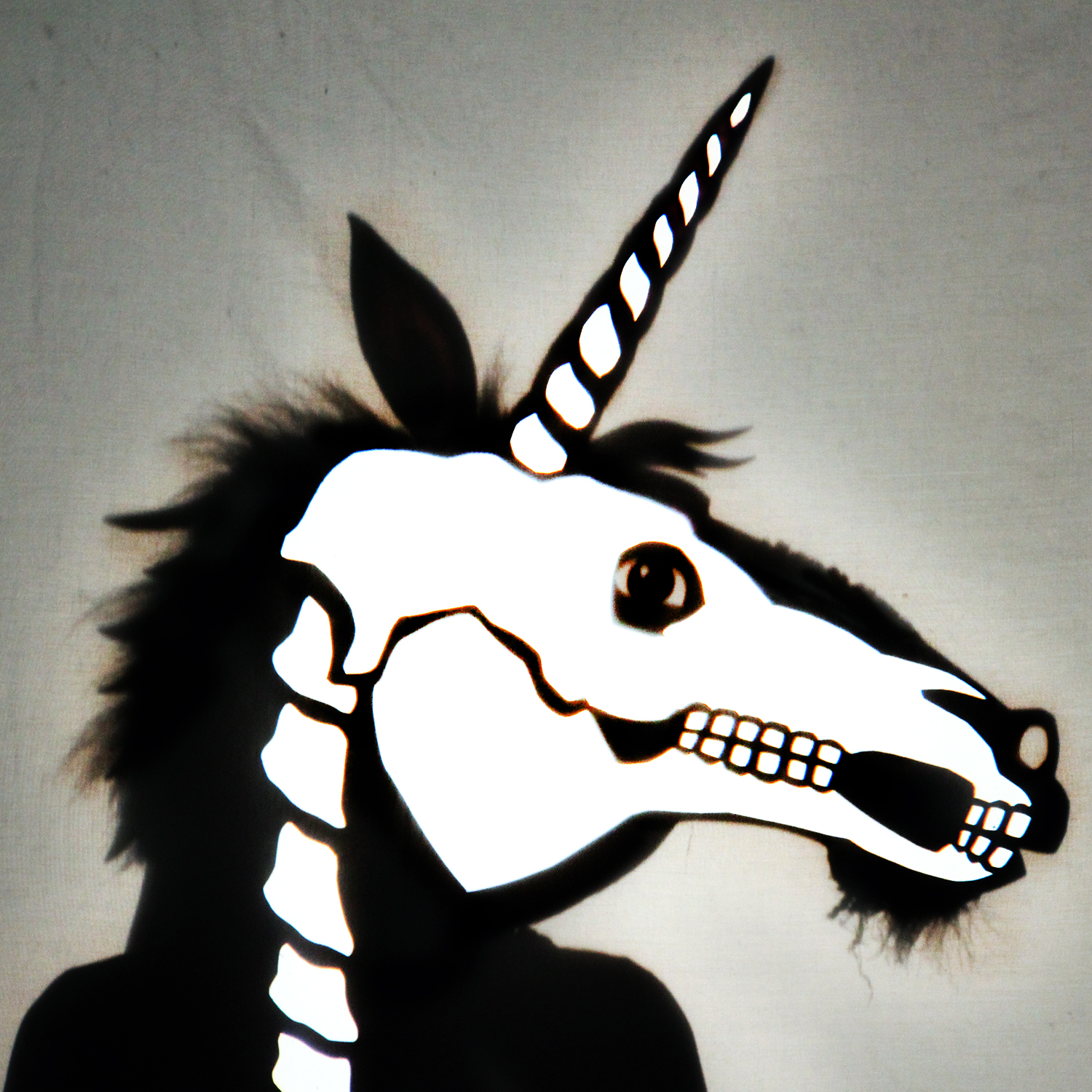 A surreal quest into the microscopic innards of a Unicorn. A dark comedy that is beautiful and strange, with handmade layered projections and original music. We’re going viral! 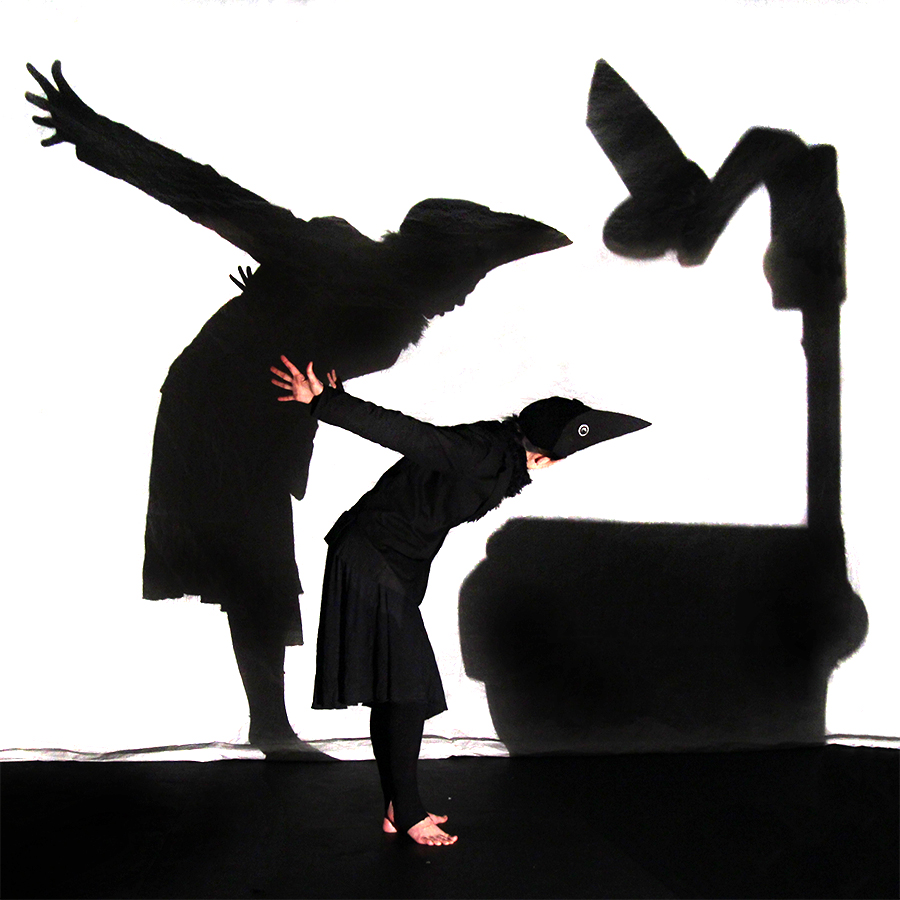 Crows are re-dreaming the world. Is the future all it’s cracked up to be?

The critics are RAVEN!

Presented at TIFA in Taiwan 2017 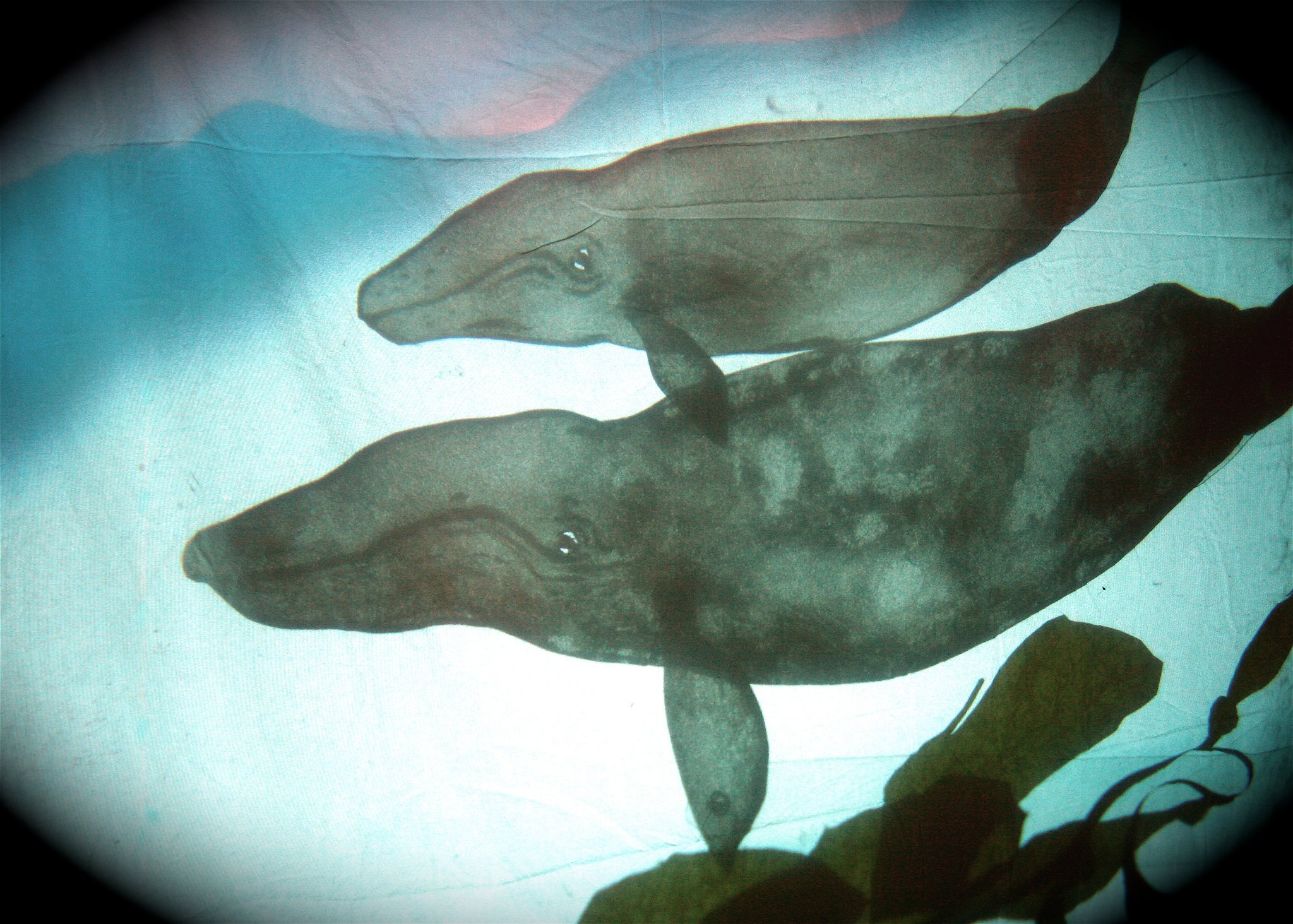 The Whale’s Back ~ 35 mins. Family Audience

“There are many dangers along the way; ocean’s a busy place, a surprise in every bay!”

This is a shadow theatre piece about the journey of a mother gray whale and her calf. Using two overhead projectors layered with colourful backgrounds and intricately crafted puppets, Mind of a Snail tells a story about the yearly migration of the whales from the warm lagoons of Mexico, all the way up the coast to Alaska. We meet some musical hitchikers on the the back of the mother whale –  a crew of beatboxing barnacles and “the Cyamid Kid,” a rapping whale louse who keeps us updated on the progress of the two whales. 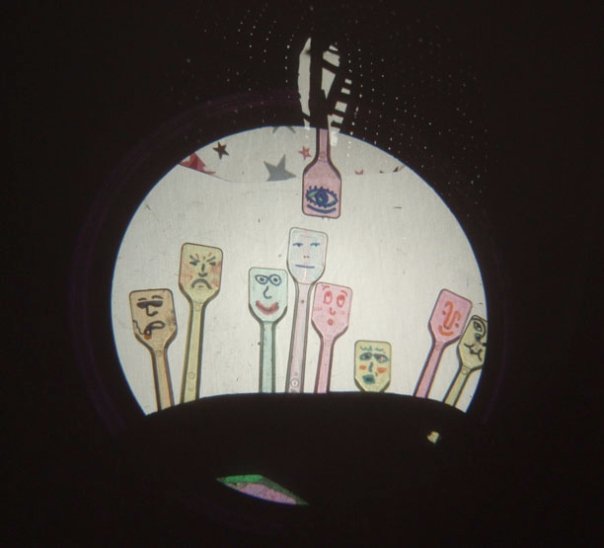 A shadow show featuring everyday objects that is strange, poignant and funny. Will the fork ever find its love? Will the spoon find it’s true place in the universe? Expect toothbrush on hairbrush violence, pens at work and spray bottles who are the gatekeepers to a mystical face. 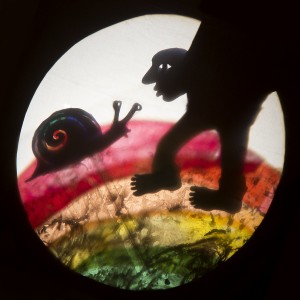 Part shadow puppet show and part live musical performance, Mind of a Snail’s “Against Gravity” is a mind-bending journey through a world filled with surprises. We meet anti-gravity protesters, an advice-giving snail and several near death experiences. Unlike a traditional shadow puppet show, the two performers of Mind of a Snail, Jessica Gabriel and Chloe Ziner, are both visible throughout the show. Using an overhead projector, Jessica projects colourful imagery onto a large screen while Chloe creates a live soundtrack with beat-boxing, guitar loops and help from the audience. Watch a video trailer of the show here.

Cheese House in the Sky

Stars of the Soil

The Most Beautiful Bug

Past Shows (not currently active): 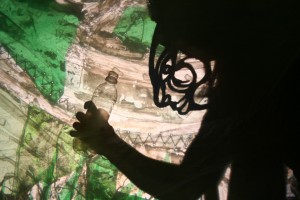 “Dear Ocean, is this really the end? Forever yours, Plastic”

The show “Plasticity Now” is a visually stunning shadow theatre performance that is multi-layered, dark, and funny in an “a-ha!” way. There are three main characters: a plastic water bottle, the ocean, and “the spirit of plastic” who changes form over the duration of the piece. This is a story about time and energy, oil and water. The original musical soundtrack and all the puppets for this show are all made from waste plastic.

“Between the clever, cinematic segues, you forget that the images are made from reels of cut and reassembled trash dragged across overhead projectors.” Paul Constant, The Stranger, Seattle

“Filled with the wonder that first got me hooked on theatre” Plank Magazine, Vancouver 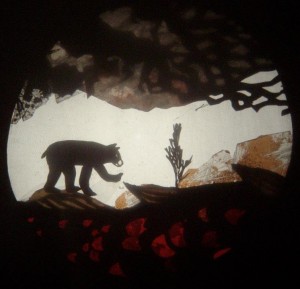 “Within winter’s cold and deep, the sun is setting low; inside her den, a bear lightly sleeps, her body full, aglow…”

What does a hibernating bear dream about? Follow mother bear on an adventure through her imagination! This gentle and visually rich show was designed for a winter solstice celebration and is appropriate for the whole family. Here’s a video of excerpts from the show. 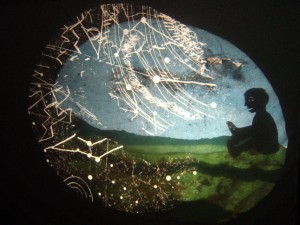 Dragon Swallows Moon is a shadow show set at the very beginning of autumn in a magical world similar to our own earth. After capturing a dragonfly, a child learns a lesson about the cycles of life from a pair of crows. 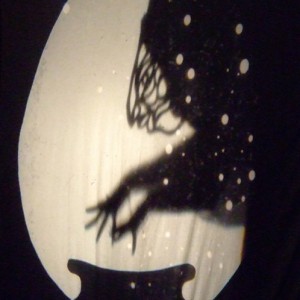 One of our strangest shows! Also known as “How the moon got its face.” A starry being is brewing a cauldron of ingredients. A running nose (it has feet), flying lips and two fishy eyes start out on separate paths – will they all end up together?

Dear Child of Many Worlds… (Mother)

How to Build a Nest

Dream of a Tree